Aulia' down with Rotavirus

Last week, Aulia' was down with the deadly Rotavirus. Rotavirus is scary. It's scary because there's a vaccine for it right? If it weren't harmful, they wouldn't have created a vaccine to save us from it. Well, I didn't vaccinate Aulia' and so to happen she contracted Rotavirus. Would she have contracted it if I had vaccinated her? Who knows? While I am no expert, I am also not a fortune teller.

Rewind a little and let me explain: I do not advocate all children being vaccinated or not. I have firm beliefs on the issue on who should and who should not vaccinate... so don't get your panties in a knot and start screaming that I'm what's wrong with the world.

So back on the farm, Aulia' is not vaccinated.  Either way some basic facts about Rotavirus: it is the most common cause of diarrhea among children, is very common and affects almost all children by the age of 2-5. It infects the intestinal tract, generally causes vomiting, diarrhea, lethargy, fever, etc. The reason it is considered a worldwide epidemic is due to the extremely limited clean water supply in third world and developing countries. Obviously, dehydration poses a much bigger threat there. Dehydration is a serious issue and it varies in severity from case to case. What work for me may not work for you.

Some basic info about the vaccine: it is an orally administer vaccine given to babies at 2,4 and 6 months. Aside from other things, the vaccine contains MSG. Among a number of less serious side effects, it has been known to cause Intussusception (which is a much bigger deal) and sometimes around 2008, Death was added to the list of side effects.

This is Aulia' when we fetch her on Wednesday from the daycare. We noticed on her illness when she hurled up something fierce. Twenty minutes later when we reached home, she upchucked on me causing vomit to run down my tudung, collecting at my blouse and overflowing downward to my pants. Lovely. I kind of just sat there in the way you do when you don't know what to do. I couldn't move without dumping a steaming pile of puke onto the carpet. The vomiting continued about every 20-30 minutes until midnight, to the point of dry heaving at times. We brought her to the nearby clinic at 12.00 am and the doctor gave Novimin (to stop the vomit). 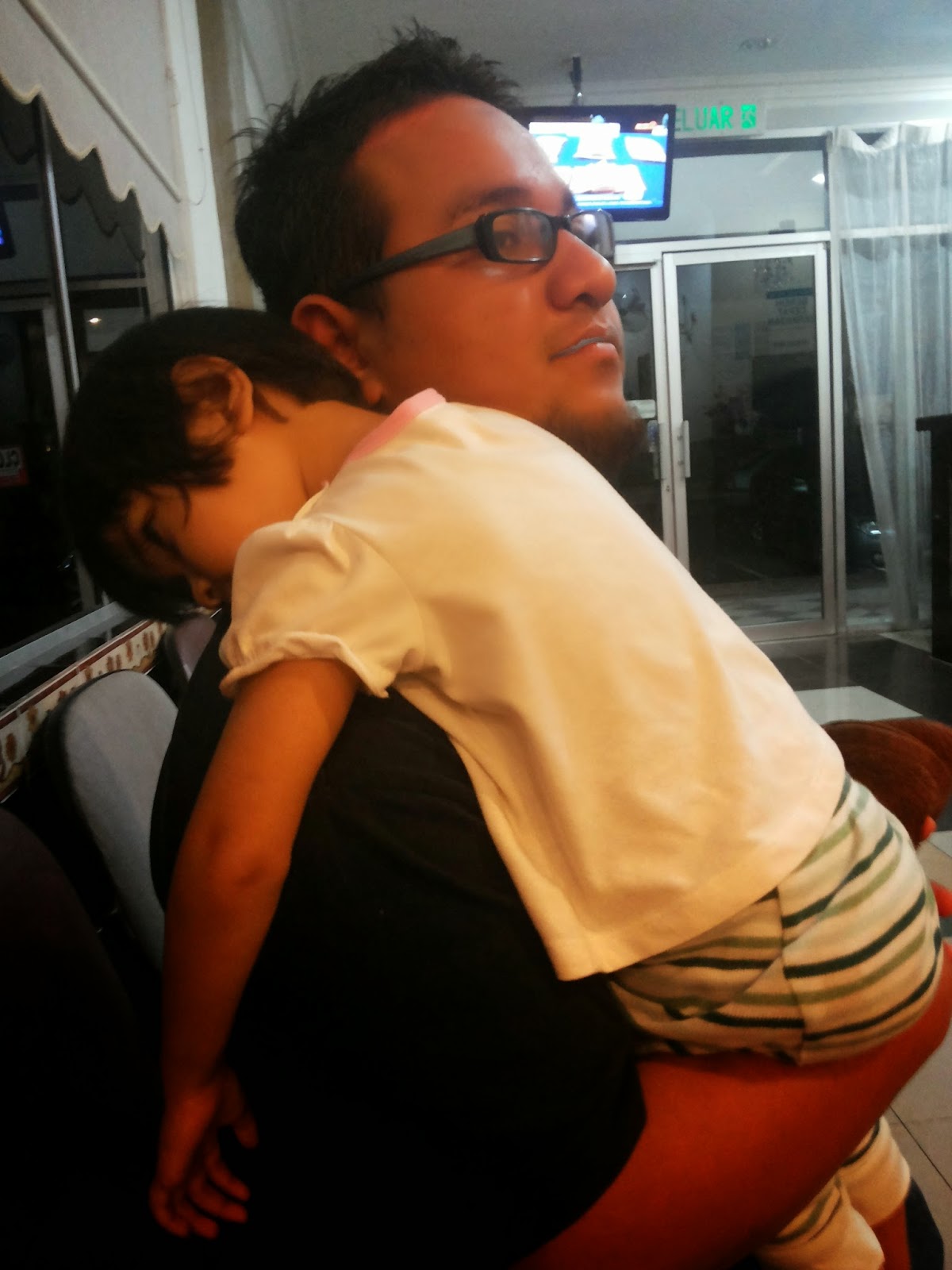 Thursday with 3 short episodes of vomiting ensued followed by the start of diarrhea. A fever started midday. Though she was lethargic the night before, her attitude was normal despite her intestinal troubles and her refusal to breastfeed or eat anything. Her Paed advice to admitted her to ward for further treatments. 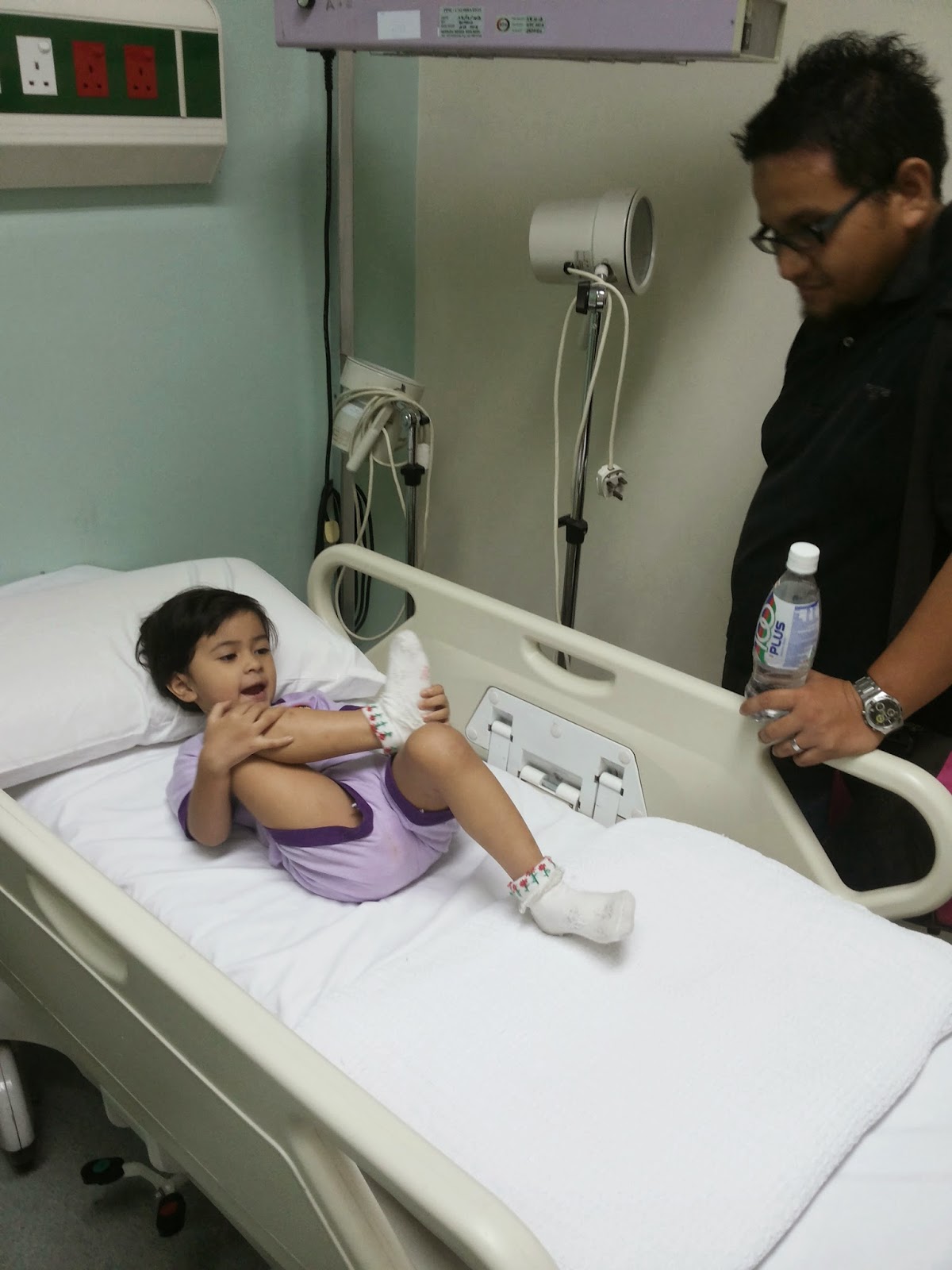 After doing an extensive check up and taking stool sample to the lab, her Paed determined she had Rotavirus. Pitiful as she was Friday, Rotavirus was a big deal for us. Doctor advised to breastfeed her, so I made sure to keep my diet super duper healthy full of vitamins and minerals. Secondly, to combat any dehydration and boost her gut flora at the same, I gave her some coconut water. Coconut water is high in potassium and is natures own Gatorade, chock full of electrolytes. The doctor's treatments are based on symptoms and more to prevent dehydration because it is not the virus that is life threatening. It is the dehydration that comes with it!! So the doctor get her the IV drip to avoid severe dehydration.

Aulia' slept. A lot. Her body was busy repairing itself. Scary as it can be when baby is vomiting. I check on her very frequently and try to lay her on her side to sleep in case vomiting ensues. I just need her to rest as much as she needed. This caused me to be restless while I watched her sleep making sure she didn't choke. Aulia' took twice as many naps as usual.We were so worried when her temperature strike up to almost 41 degree C. Doctor has worn us that it might caused convulsions to Aulia'. Well, papa gone crazy with the news that he insisted to stayed up in the hospital with us. 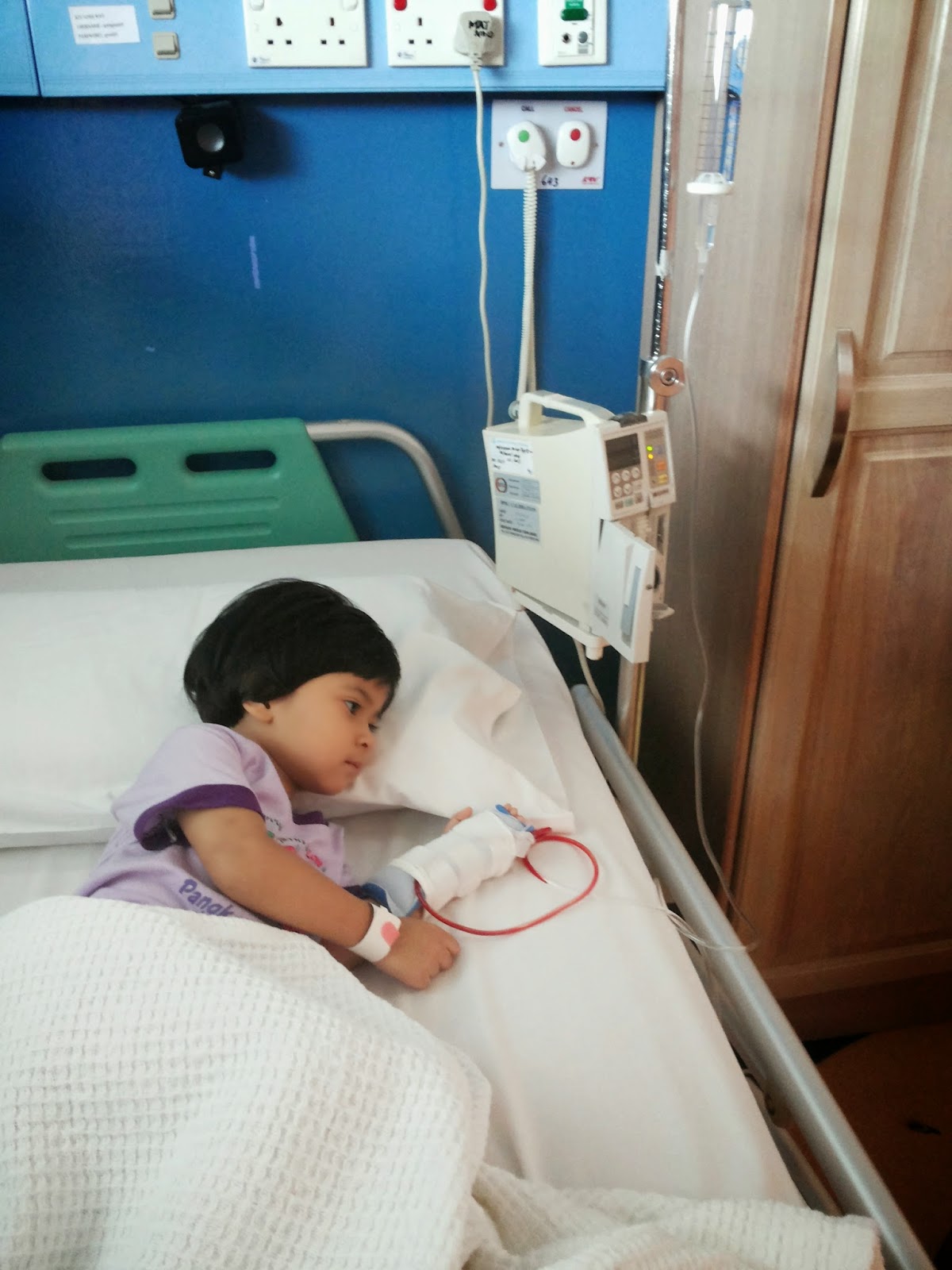 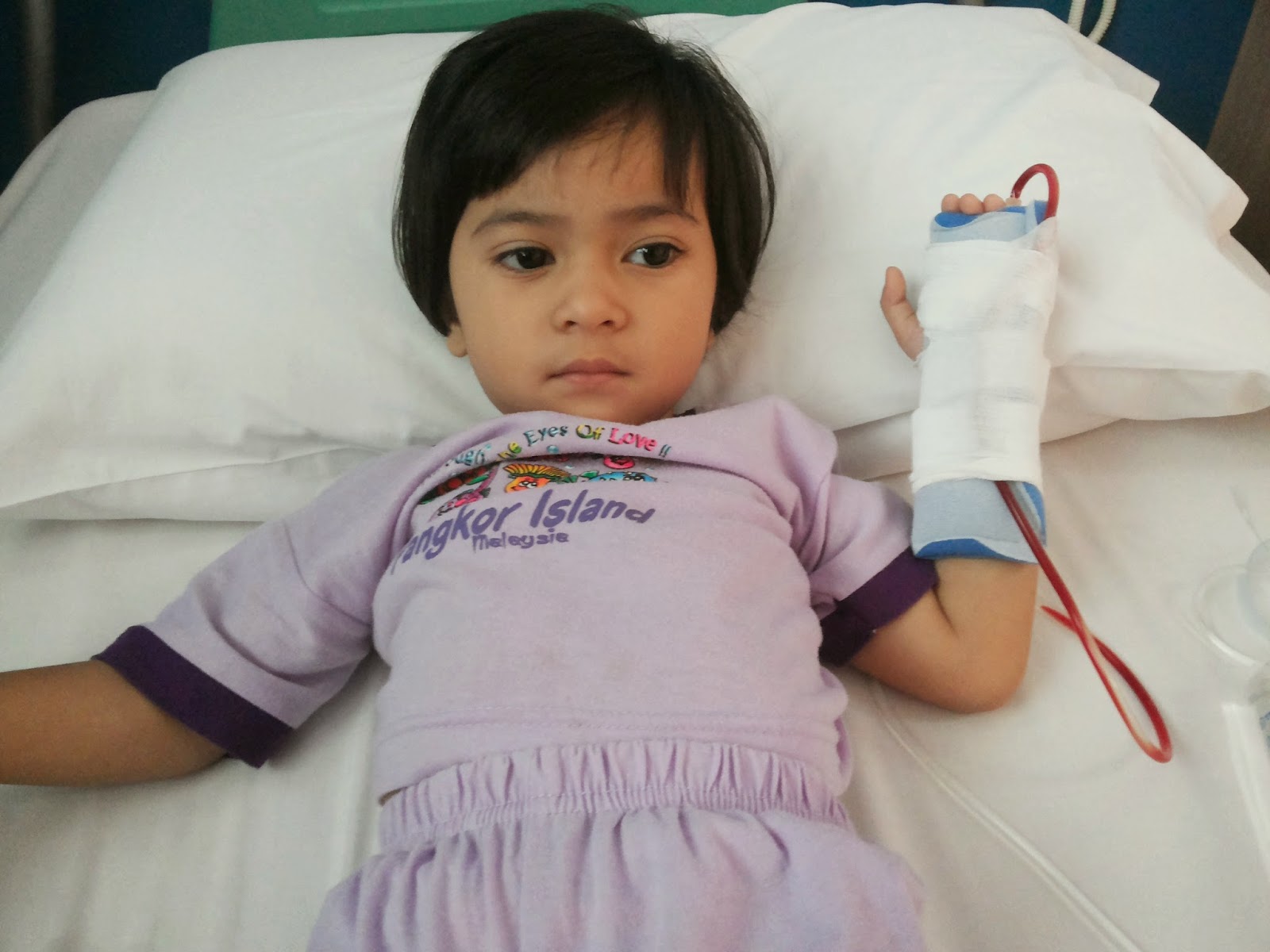 Doctor advice us to wash hands frequently. The virus is pretty damn contagious. Once you touched the foods/drinks with your dirty hands, there you go the deadly Rota.

We stayed in the KPJ Ampang Puteri for 6 days because Aulia' need at least a week to fully recovered. . Pretty bored and she quite happy when her favorite cousins came and visit her in the hospital. 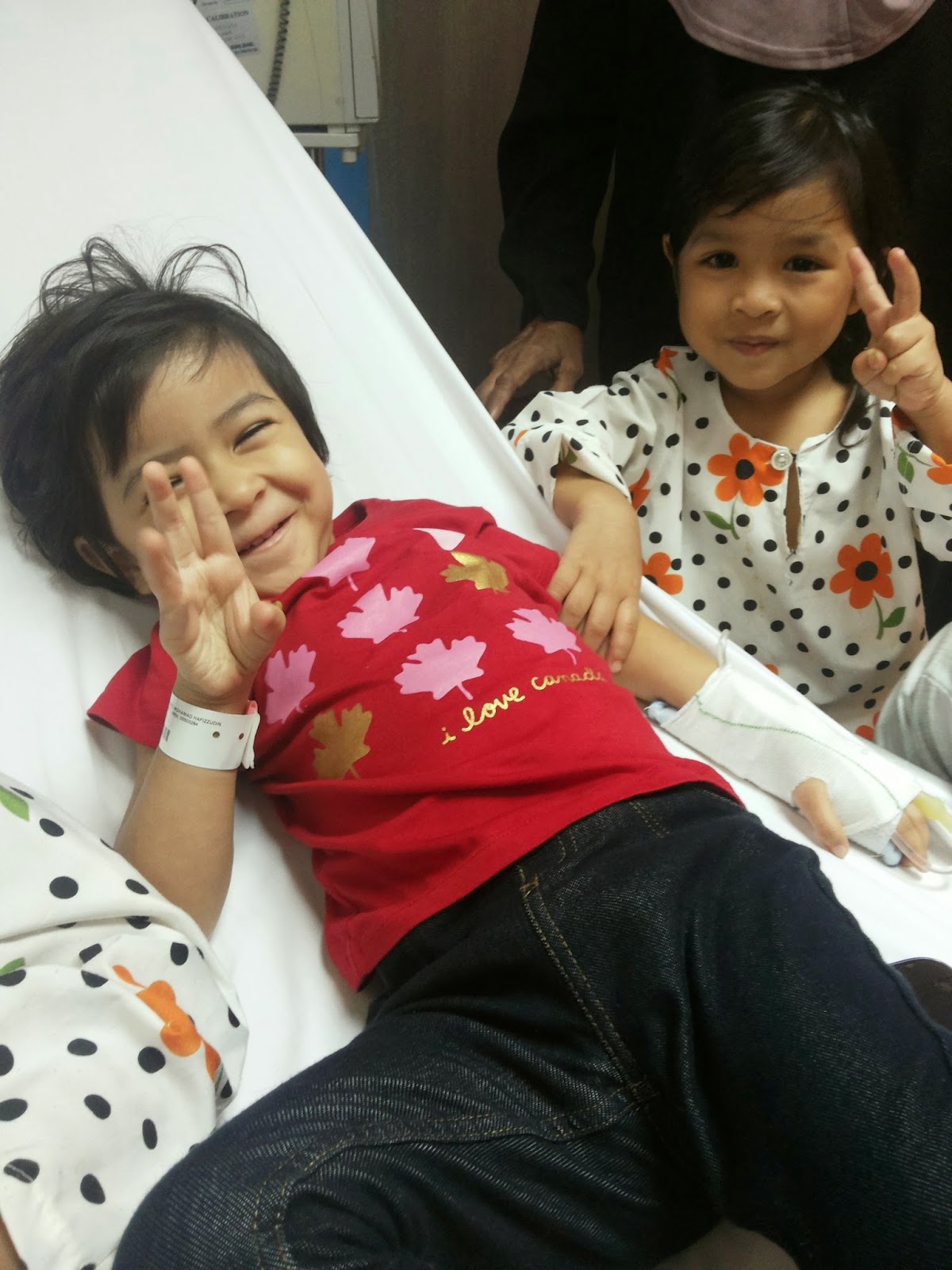 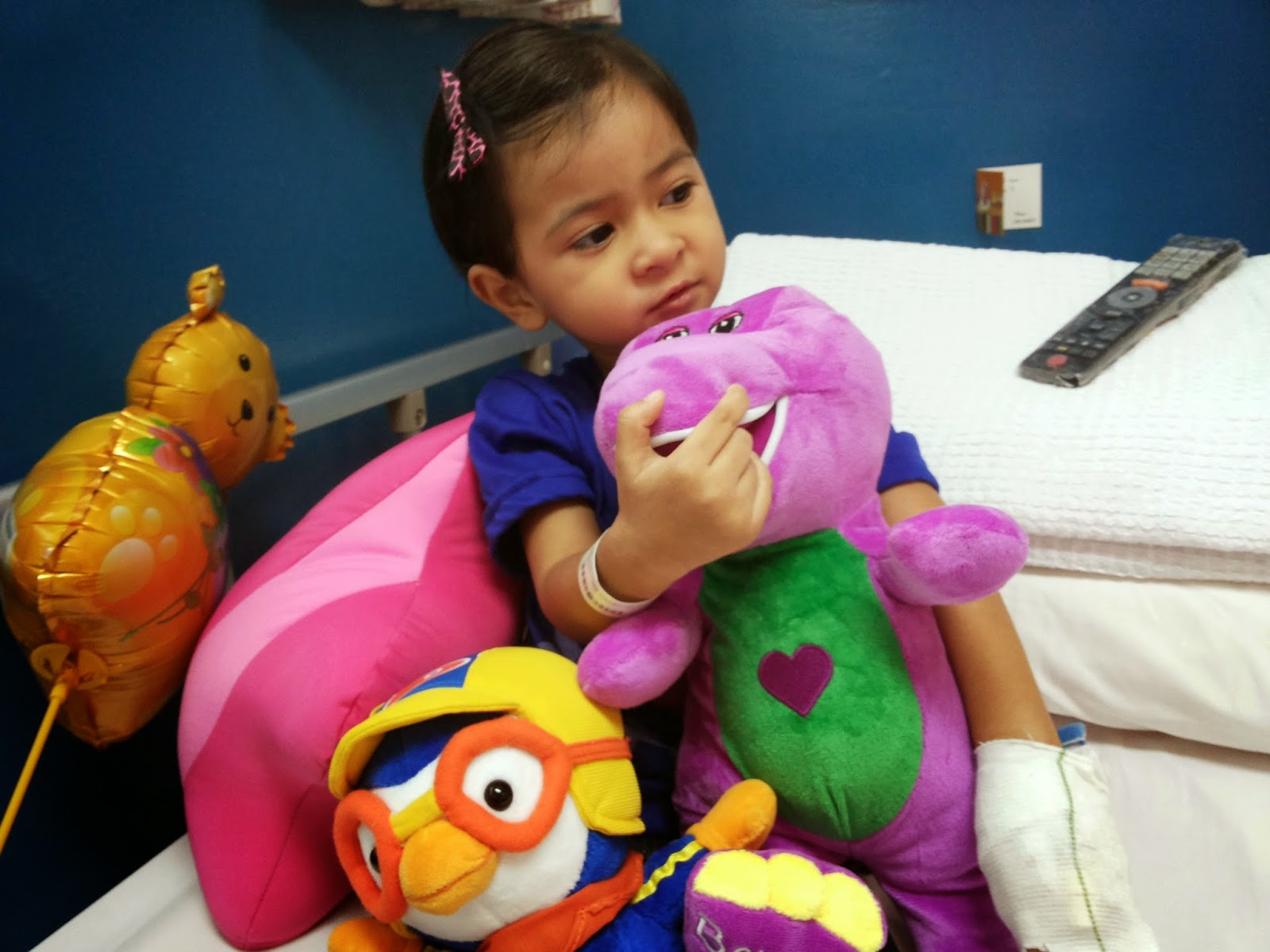 Alhamdulillah, I am glad she is now fully recovered from the deadly Rotavirus. And this is what our Paed always remind us about; STAY CLEAN, WASH YOUR HANDS, STAY HYDRATED :)

Anonymous said…
You actually make it seem so easy with your presentation but I find this topic to
be really something that I think I would never understand.
It seems too complex and extremely broad for me. I am looking forward for your next post, I'll try
to get the hang of it!