Last year I managed to score tickets to Kuching, Sarawak for a mere RM308 inclusive ourself and our little one. I wanted to cover Borneo and can officially say that I almost have, hehe! We will try to reach Sabah soon.

Hey hey gfs, am travelling again with my old folks, they seem to be taking me everywhere they go thesedays, how boring! Text ya when I'm back. Peace!! :D 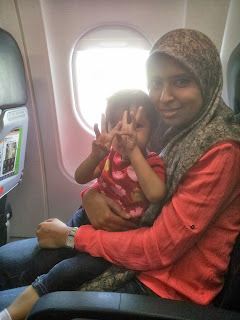 We stayed in Ariva Getaway Kuching which was a 5 minutes drive from the Waterfront. The room only cost me RM130 per night and it was pretty decent. Small but very cozy.

We also rented a Saga BLM to take us around for only RM80 a day. It was the cheapest rate I could find. Taking cab within Kuching is very expensive that is why we opted to drive ourselves..makes it a whole lot more fun exploring too!

First stop on Friday when we arrived was to check out the Waterfront area. We sat by the River and ate some Cucur Udang for snack. Their version seems to be very different but it turned out to be pretty good that we ordered another plate.

The view of the Astana from the riverfront. 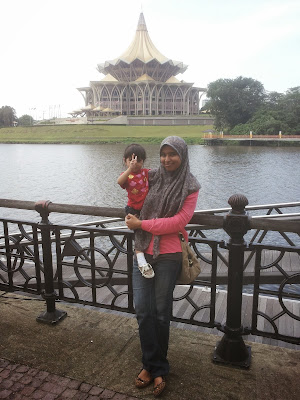 There are choices of taking a cruise too to check out the area. We opt for the river cruise and it cost us RM19 per person. 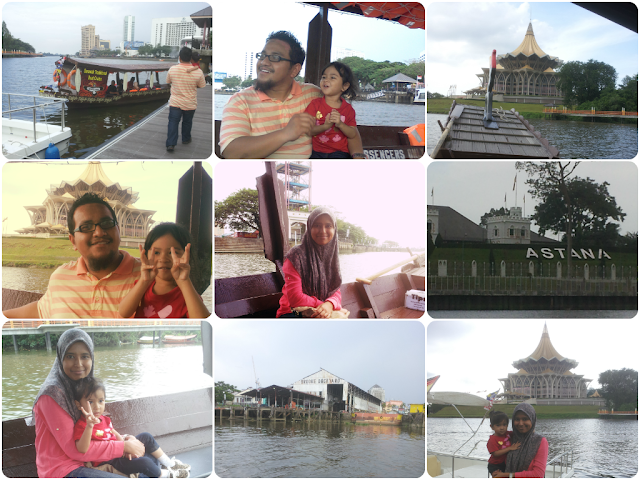 One of the things I made sure to properly research was where to eat. Kuching may not be the most exciting city we've been to but at least the food was DELICIOUS! Now I totally understand why those who are from Sarawak are totally proud of their food.

Just one of the MUST-EAT when you're in Kuching..I present you Kolo Mee! This was the halal version. 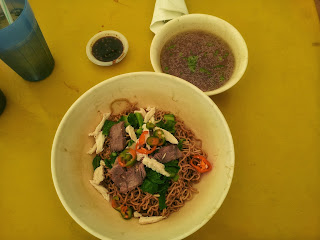 On the second day we went to Sarawak Cultural Village, SCV which is located about 30-40 minutes drive from Kuching city.

Today children, we shall learn about the various cultures in Malaysia! Its one of the things that intrigues us wherever we go....we are always keen to know what's the culture like in that particular city, how people live, what they do for money, what they eat and the list goes on.
The drive was quite scenic. We finally arrived and then realized this is where the annual Rainforest World Music Festival usually takes place. Cool! Entrance is RM60 a pop, which is VERY pricey in my opinion. Half the price of our airflight tickets yo! It breaks down to RM10 per house that you will visit in there. When the guy asked if were Malaysians, I really thought we'd be given a discount but NOPE. Guess I should stop being a typical Malaysian who always expects discounts? Heh!
Ah yes hence hubby's look, lol. Would have been a waste to turn after that long drive so we pressed on. 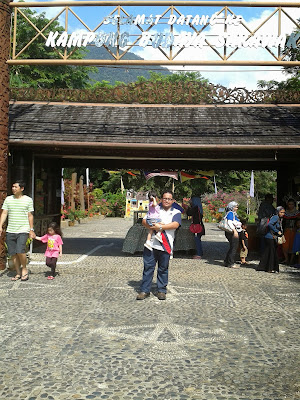 First stop the theatre of Sarawak cultural show. The stage is beautifully set in a brilliant ethnic musical theme of bamboo poles, thatched huts and exquisite traditional arts. Soon, a prologue of traditional Malay dance ensued, followed by a casting ensemble of the much-revered Puteri Santubong  and Puteri Sejinjang danced their heart out while narrating the legendary story of these two beautiful princesses.

Then, on stage came a dance ensemble from the Orang Ulu tribe, with the men dressed up in a peculiar fashion of colourful long skirt which dancing of welcoming ritual to guests to their longhouses. We had so much fun watching the Iban warrior made his lone appearance with his dance performance of Ngajat Lesong. He called up a girl to join his performance on stage and teach her few step of Ngajat Lesong. Next in line was dance performance from Melanau tribe for their Tarian Menyak and Penan Warrior for their dart performance. 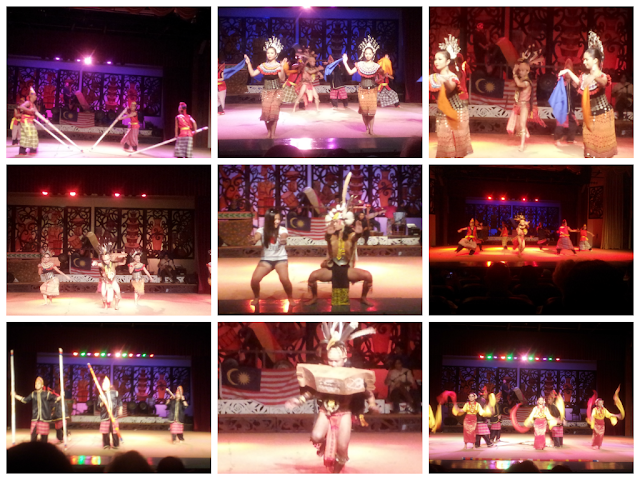 Later then after lunch we went to Chinese house. Most of the Chinese people here are likely to be Hakka or Foochow descent. 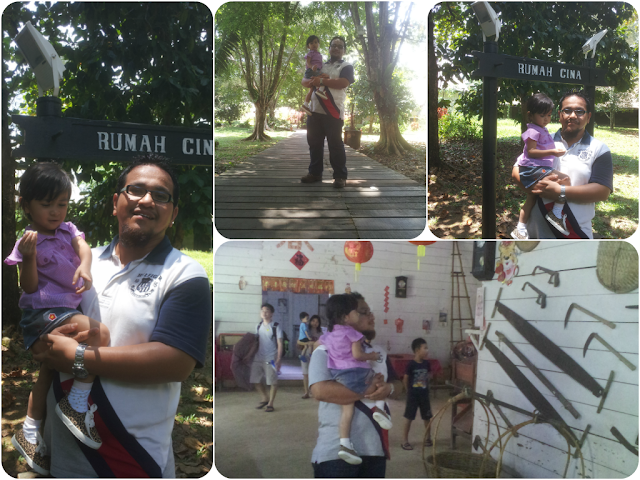 Then, we move on to the Malay House. The only house yang kene bukak kasut :) Rumah Melayu kann... 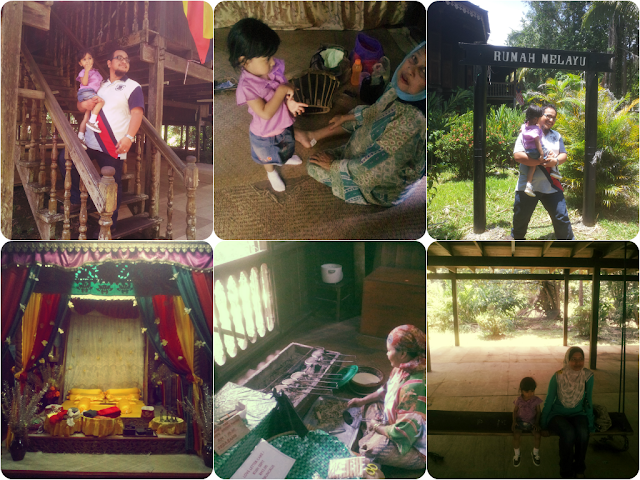 They were also making Kuih Kapit/Kepit in this house which were up for sales and my fatty hubby made me bought few packets!

The third house was the Melanau House, which was my favourite. 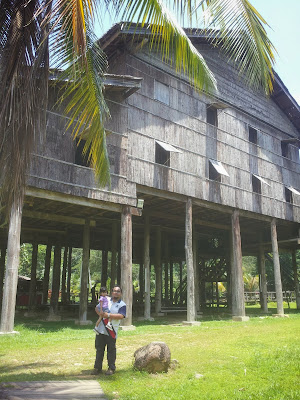 The house is so massive and regal looking, like a mean ass monster truck.

Ready for our Melanau exploration.. 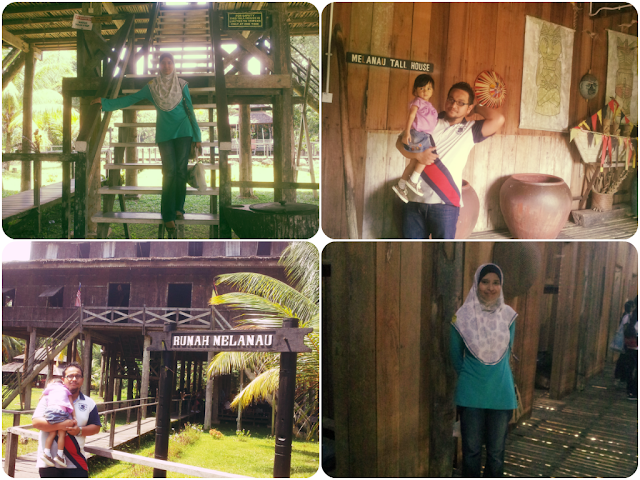 Melanau is differ from most because they eat sago in preference to rice. Sago palm originally grew wild in the coastal swamps, and they are cultivated. We had the opportunity to try the 'Lempeng Sagu' which were made fresh by the Melanau lady. 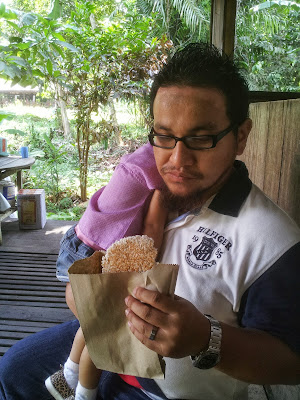 The lady explained to us while some Melanaus are Muslims now, they still can live in harmony with the Christian in the long house. They just cook separately, for obvious reasons. But seriously, I can't imagine one whole family occupying ONE room! They also offer home-stay in each house, just incase you might be keen. Think I would most definitely pass on that.

Next up, Orang Ulu house. Never knew they existed. 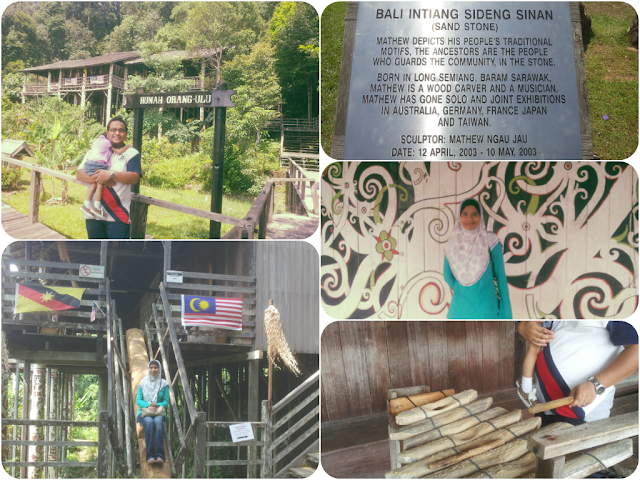 We saw the amount of stairs to climb and freaked out. Plus the weather was SUPER hot and we were sweating like a rain shower at this point I just wanted to end the tour. haha!

We walked along and found a Penan House, if one could even call it a house. The shy nomadic Penan live in the dense jungle of Central Borneo. I seriously doubt the 'shy' part coz do check out their outfit yo. Just a loin cloth to cover those modest bits. Wonder the cloth is so long though, hmmm :) 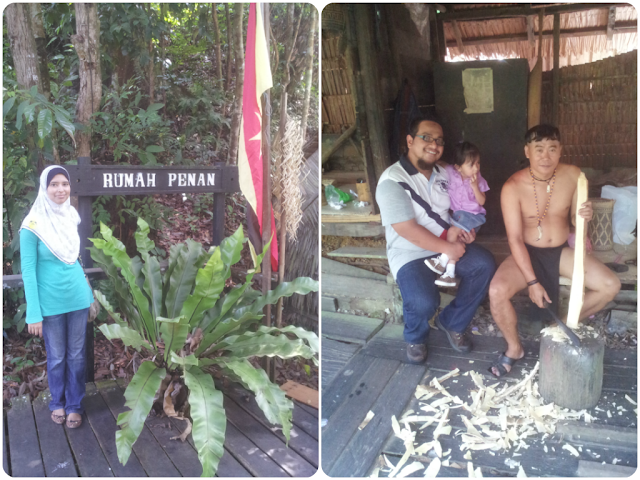 5th stop was the Iban house. Weather was getting unbearable at this point I might add.

FYI, about 1/3 of Sarawakians are Ibans; while some of them lives in town or houses, a large number of them still prefer longhouses. 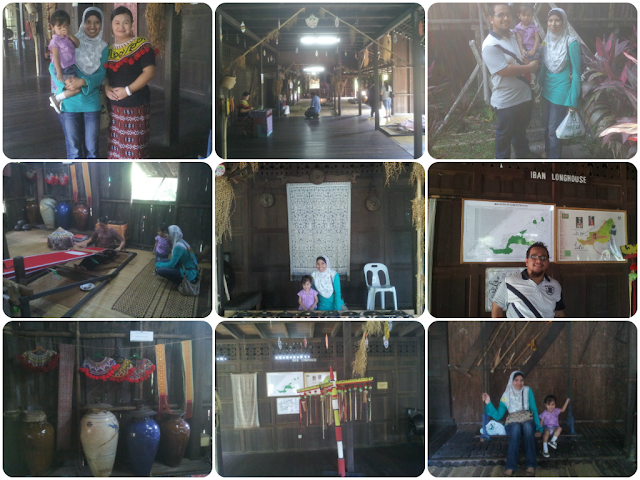 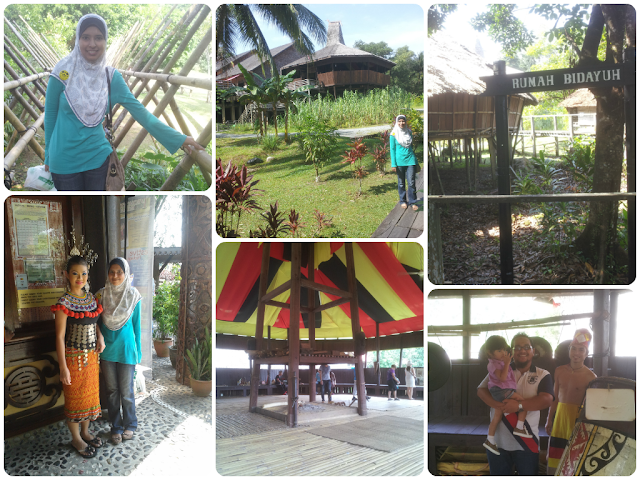 Sweaty sweaty smelly people. And yes we actually drove back all the way to hotel after that just to shower again before meeting my Unimate, Wani at the popular 'makan spot' at Top spot Food Court.

So its the end of our Sarawak Cultural Village tour. Despite the weather, we still enjoyed every bit of our education. So hope you enjoyed the little tour, you better..coz I just saved you RM60, hehe!

During dinner, we went to Top Spot Food Court (which is located just behind our hotel), and we met Wani, her husband and her two girls. It's been awhile since we last met three years ago. She was my coursemate back then in Uni and she now work as a lecturer in Uitm Samarahan. Yep, we realized we didn't snap any pictures because was too busy handling our little one during dinner. Sigh :(

On our last day in Kuching, we went to the Riverfront again just to capture our memorable short trip with our little family. Here us at Kuching Cat Monument. 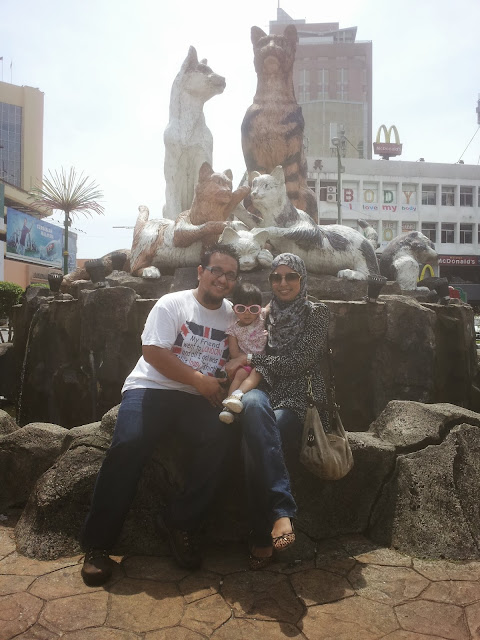 Just so you know, Kuching was voted as the healthiest and the cleanest city in Malaysia, as well as in the world, which recognised and awarded by both United Nation (UN) and World Health Organization (WHO). Like seriously, this is no joke. Kuching is really clean! 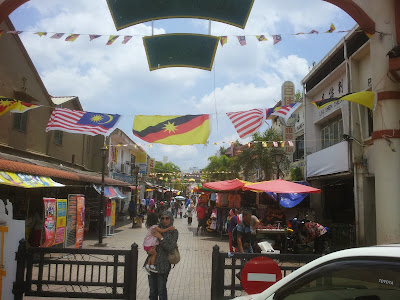 If you're driving to the Astana, make sure you drop by the famous Kek Lapis shop in Kuching called Dayang Salhah. Alot of people actually take the boat across just to get here. They also deliver to those in KL-joy! I highly recommend you the Chocolate Cheese, Cadbury Cheese, Kek Lapis India, Azura Layer cake..to die for, literally! I bought back close to 10 packets and they nicely wrapped it up for me. It price ranges from RM10-13 for small packet. Didn't help that my bag was 2 kgs over-weight despite packing minimum items into my main luggage. 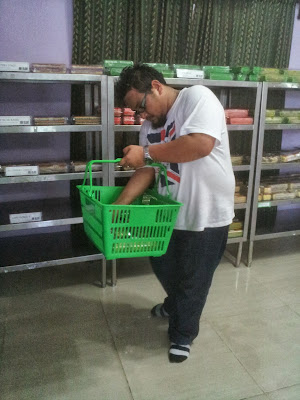 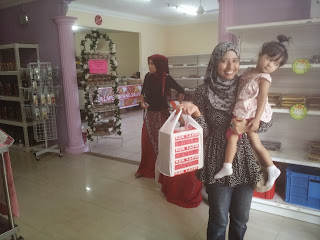 They are very generous with their samples..the more you try the more you'll want to buy. True story. 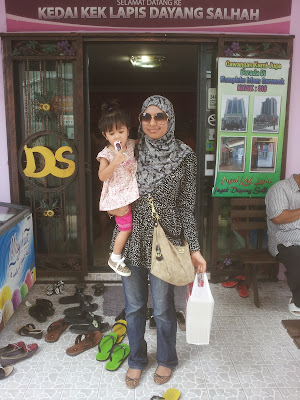 While its too early for our flight back to KL, we decided to go for another place which was the Orchid Farm. Admission fee is free and its open everyday except Monday. My little one insisted to took her photo while strolling around the farm. hehe! 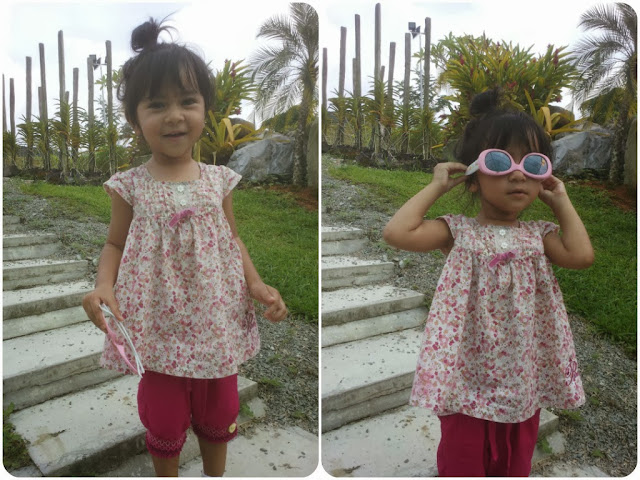 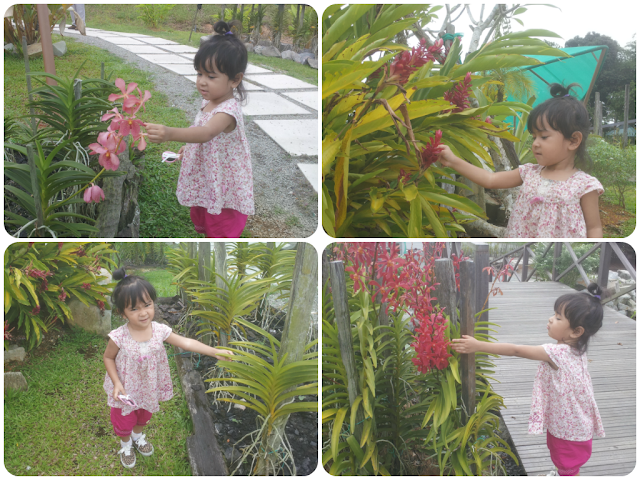 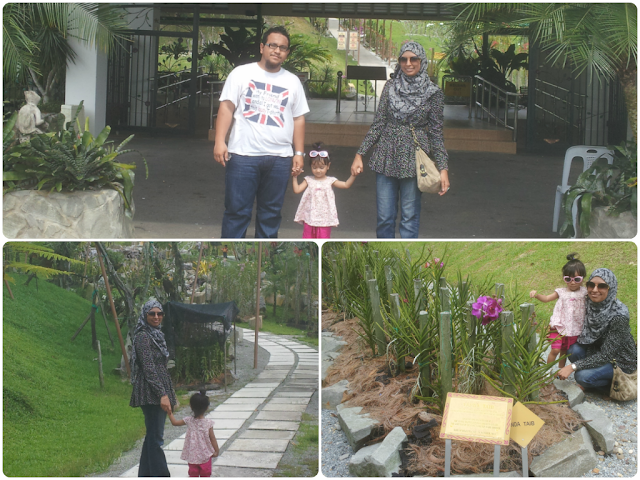 So that said, there are no other trips scheduled until February perhaps. Hope the next few months whizz by quickly coz the OCD in me actually loves packing for trips!