There comes a time where a mother would talk about the most awkward subject (oh say about poo, the color of poo, more poo to name a few) that she would have never dreamed about talking when she was single/younger/without a child.  That's what motherhood does to you and with that, today I'm going to talk about Aulia' training from diapers to panties which weirdly enough is a very proud mommy moment ok.

That's right, my baby doll, who is already TWO last month is working hard for diapers off!

Her potty training started at 22 months thanks to my mom's initiative. As it is, Aulia' gets bad rashes from pro-longed diaper wearing so whenever she's at home, my mom would let her wear pants without any diapers on.

Anyho, we would take Aulia' to her blue throne every 30 minutes or so. Make no mistakes as there have been cases where she's just let it go. So yes, mopping off pee on the floor was quite common. There were a few times I took the mop, gave it to her to clean up after herself, lol. It wasn't all easy at first convincing her to pee on the potty and I have to tell her like so many times "Aulia' nak sheeshee please tell ibu okay". 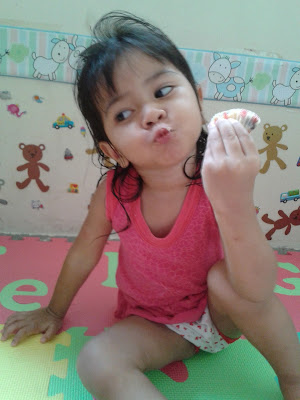 Long story short, after a while, she got used to it and her peeing time went from 30 minutes to 1-2 hours each time. She would still sleep in her diapers coz around 2 onwards, her pee seemed to have doubled up in volume!! Look at me, talking about pee and pee volumes, lol. There were instances of her maximizing out one single diaper in a record time of 3 minutes!! I remember putting in on her, went on to do my makeup and when I checked again-it was FULL!

Can kids pee alot or what?! There were times I used to wake up to very wet pants and bed sheets coz her diaper had been filled to the brim and I felt so bad seeing my baby sleep in her pee infested diaper and pants! But what can I do if she pees so much right?

Then about a month ago, I noticed how dry her diapers would be every time I changed it at night. Like only one diaper was needed the entire night and even then it's usually dry or peed on very little. From that, I knew it was indeed time for an upgrade! Or downgrade-whichever way you wanna see it as :)

So I put a Disney mini mouse panties on her which she picked it out herself. So after getting her that, we just went with the flow (no pun intended) and hoped she wouldn't pee on the bed! I told her repeatedly not to 'mess' it up by peeing on it. I think on some level that helped coz she does love her Disney panties constantly telling is how pretty they are, hah.

But for now, the hubby is just happy with the idea that we can cut down on diaper expenses real soon.