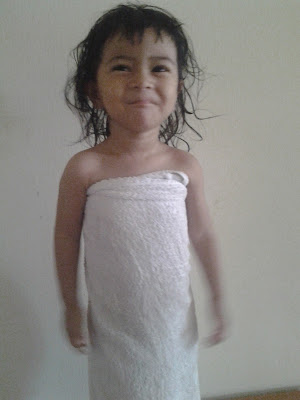 Aulia' is now 8.3kg and 79cm. She's 100% perfect and healthy as usual. Her appointment didn't go so well, though. It's official: she's absolutely terrified of the doctor. The minute she saw the nurse, she got all clingy and as soon as I set her on the table and started to undress her, she lost her mind. I had to stand on the scale with her to get her weight, and when the doctor tried to look in her ears, we had to physically restrain her while she turned bright red fighting us. It was just terrible. She's loosing her weight which is another terrible thing. Poor girl. Hubby was there though, and he was so sweet with her, trying to calm her down and cheer her up. It actually did help a bit to get her mind of all the torture at the end:)

Otherwise, she's a normal totally bipolar toddler. Happy, silly and funny one minute...a screaming mess the next. She's miss independent, too. She loves to try to do things by herself, like putting on her shoes and pants.

She still isn't saying a ton of words, but I'm not as worried now. She got a bunch of new words since her last appointment. She added shoe, sleep, biscuits, no, book, sit, jump, swim and probably others that I'm not remembering now. She also says "meow" when we ask her what a cat says, which is so freaking cute (even though that's the only animal sound she says currently). Even cuter than that? She blows kisses. I die of cuteness every time. My dad love to watch her making funny faces. I read the bedtime story for her every night so that she can catch up more words even though I know she only interested to look at the illustrations. Recently I taught her how to say 'Caterpillar'. It so hilarious when she pronounce it 'pillapilla'. lol 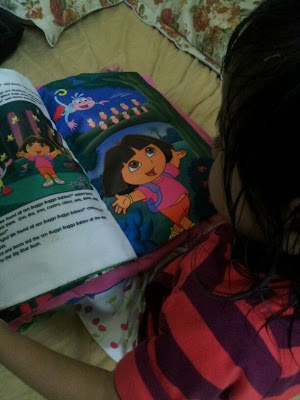 She got 16 teeth now (well, one canine isn't all the way in yet),  is a great eater (eventhough she's not putting on so much weight) and is getting better at using a spoon. Remember how I told that whenever she eats by herself, half of the food goes down to the floor. She'd probably be better by now, if we let her have more practice, but it's usually easier to just let her use her hands. We're working on it though. I'm trying to let her do more coloring, too, but she always ends up trying to eat the crayons (please tell me that's still normal..) so we have to find something else to do. 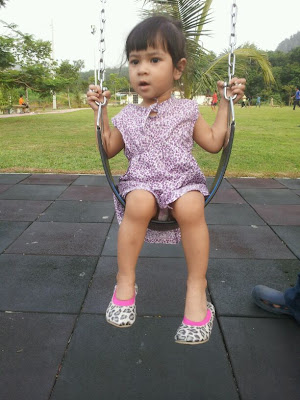 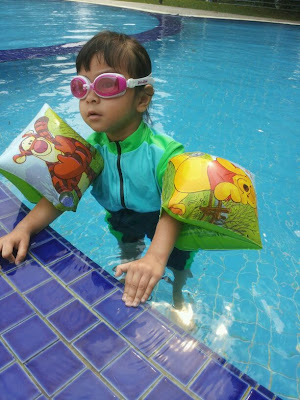 She loves the park swing so much and she just giggle the entire time. We still sending her for swimming lesson every week. Sometimes she got all moody and wanted to stay out of the pool. All in all, Aulia' is the most fabulous, perfect, most awesome little girl and I just love watching her learn and grow. Cliche, I know. But it's so true. She always seems to put a smile on our face with something cute she does, or a funny expression she makes. She's awesomesauce, pure and simple.

Anonymous said…
Hi! I could have sworn I've been to your blog before but after going through many of the articles
I realized it's new to me. Regardless, I'm definitely happy I discovered it and I'll be bookmarking it and checking back
regularly!