When Ipad/ Tab was launched and everyone was seen carrying it around, I never really understood the craze about it. Now I am what you call a technie noob. Same goes with my husband. I don't care much for gadgets, and neither do they care for me. I also don't understand the fuss about having the latest phone and so forth. I might admire it for a while and wish I had one but I can never bring myself to splurge that much on a tool that might get lost/stolen or be completely under utilized due to my noob-ness, heh. So when most of the time people talk about the latest gadget or parade their latest 'canggih' phone I completely blank out hide my crappy BB old phone  and just equate their love for gadgets akin to my love for shoes? Except I think my love for shoes is a cheaper hobby than theirs, hahah!.

Now I am no fan of getting my child addicted to such gadgets either. I think its plain bad when kids are shoved with their parents Tab/Ipad when they go to the malls. I've seen it countless of times. My child however is your old school kinda brat who ENJOYS going to the bookstore. I kid you not, the immense happiness she gets walking in a bookstore is beyond me. Aulia' loves flipping through books and when we go to the store she says "book book !" Too cute. 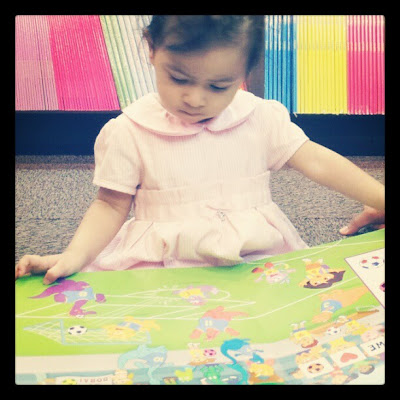 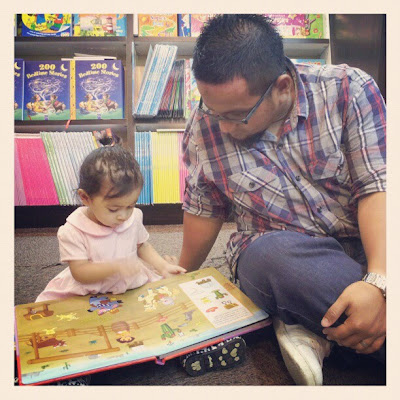 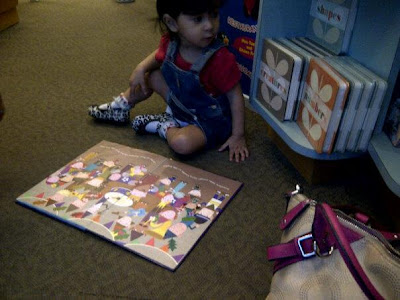 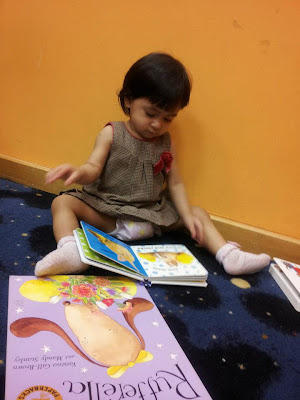 There was one time we took her to Borders and she almost cried when the cashier took her book away to key it into the system. I wont have any complains if she turns out to be a little bookworm coz I remember finishing up a thick novel in just one day!!I was so into my book that nothing else mattered. That's the power of a good book.

While I'm glad my daughter enjoys picking up and holding a book, I also know we need to keep up with times. Besides, some apps for children are actually quite beneficial and would be a good tool for Aulia'. Of course limiting her time on it is also essential- so ibu and papa can hog it :)

So now we are proud owners of the new Samsung Galaxy Tab 2 10.1 although the husband was acting like a little boy by warning me not to hog it to myself. He got further irritated when I told him I wanted to buy a HOT PINK cover for it. . Smile smile!!

To date its mostly filled with a few games for Ibu and alotsa of kiddie LEARNING apps for Aulia'. Some of the learning materials are actually quite good and little one seems attentive so far, repeating words and learning about animals.For the past 2 months I've spent teaching her these things and she has since picked up more words. Her favourite so far is this Elmo teaching tool and of course Pocoyo series!! That kid just LOVES her Pocoyo cartoon with her favourites character being Pato, the duck. But still Aulia' called it 'Titi'.. 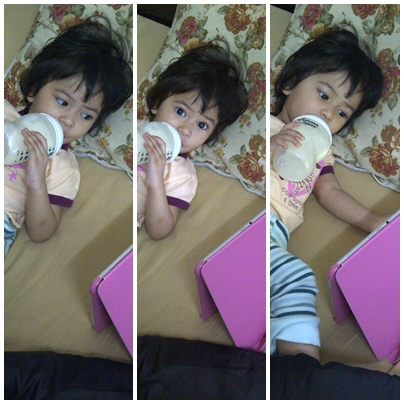 Dear Ibu &Papa thank you for this Galaxy Tab!! I can now access to Pocoyo whenever I want!

That said, we're limiting the use of the Tab only to home usage. And it doesn't help that every time Ibu buy an app,papa would received notifications from the Bank that something was charged to his credit card. But oh wells, I've been blaming it on his daughter's apps thus far so we'll see how long this can carry on.. coz papa seems very generous when it comes to his baby girl.Don't they all?  :) :)