Last night we had a mother/ daughter dinner. It was a lovely evening...
I wanted a middle western food but was almost broke..hehehe! And you can't beat RM 29 for two pax for a 5 course meal. It's equivalent to the price of 3 large meals at a hawker centre, except everything is middle-eastern! 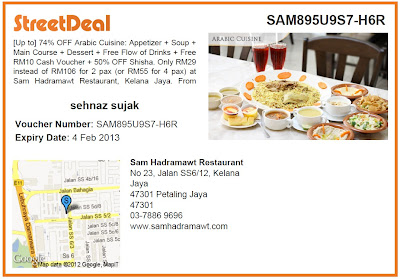 And of course, it's a StreetDeal voucher..eating in KL can be so damn expensive, so why not grab this yaw..Plus I love how we're usually spoilt our eating choices too! 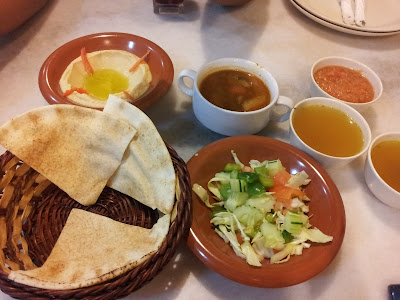 We had Hummus which were at the left hand side in the picture. One should always order hummus when eating in a middle-eastern restaurant. It's something that's quite different and unique to middle eastern cuisine. Sam Hadramawt's hummus had an overpowering olive/sesame oil taste which I didn't quite like, but was still good nonetheless when eating with nan bread.
We would have gladly traded in the watery concoction of Salad and Mixed Vegetables for more Hummus. I think both vegetable dishes were made from the same ingredients, except that one was put into a blender! 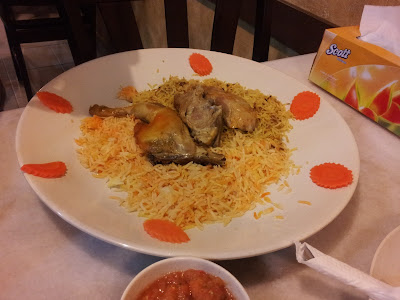 I dig Sam Hadramawt's rice without any sides just to savour the fragrant spices in each spoonful of rice. Lightly coloured, soft and fluffy, middle eastern rice is awesome as usual. Why do we eat plain unflavoured white rice when there are much better alternatives out there, like nasi briyani, saffron rice, middle-eastern rice, nasi lemak and chicken rice? Oh dang! I know I know..(Smack my own forehead)..

I would like to have my chicken on a skewer, ala Kebab style that is boneless and easier to eat compared to a winged drumstick, but the waiter skipped the Kebab option from the Main Course choices. 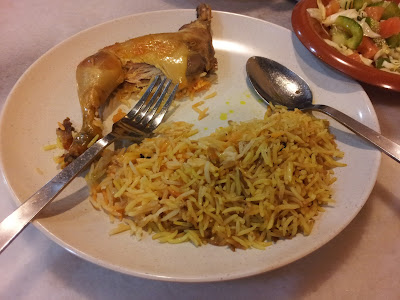 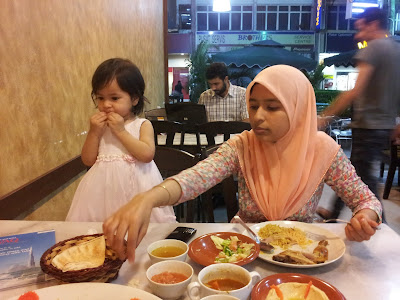 Overall verdict: If you can afford it, I'd recommend that you pay full price to have a proper main course meal and the hummus, then skip the rest. Your tummy will be full by the time you're halfway through eating the main course anyway, especially with middle-eastern serving portions.  But if you're almost broke like I was (and still am), don't pass up the opportunity to eat a meal with this much variety at such a price. Despite my nitpicks it was a steal.