I was hesitant to post this but it's what's on my heart and mind today, so here it goes..

I'm not pregnant. I know, a lot of people aren't and it's a strange thing to say. But I'm not pregnant. This weighs on my heart like a ton of bricks and it makes me sad. Every minutes.
Getting pregnant with Aulia' was really easy. My delivery was tough but it was successful. After almost 24 hours of labour, I had a happy, healthy baby and I survived. What more could I ask for?

I assumed having another one would be easy. I had these pregnancy symptoms for the last couples of weeks. I felt nausea and constantly vomiting in the morning..just the exact symptoms when I first had Aulia'..but I am not where I thought I would be. I thought that I would be announcing on Facebook, planning for my anatomy scan and excited to make Aulia' a big sister.

So I had myself a pregnancy test.. 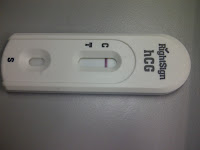 Well, I'm a bit dissapointed with the result though. I know so many people who have had difficulties, honestly, before having Aulia', I had a feeling I would be one. After having her, I knew getting pregnant and having a baby would be easy. Why would I ever think that? Who ever would assume getting pregnant is easy?

You never know how the words "when are you having more?" can sting. You never think about that kind of thing until you or a friend goes through it. I had a friend who had a struggle finally getting pregnant with her sweet boy and it wasn't until her that I thought to keep my "When are you having babies?" to myself. But to constantly hear "it's time for another" and "When are you going to make Aulia' a big sister?" sucks.

Aulia' is incredible. She is absolutely the best thing ever happen to me, the best thing in my life. Thinking about how much I adore her completely overjoys me. I don't discount her or feel that she isn't enough.

But it doesn't change the fact that I want more..cuba lagi:)